Leveraging the strengths of global product development, production, and sales networks as well as our marketing capabilities and brand power, the Ajinomoto Group offers products and services that contribute to delicious tastes tailored to the eating habits of local consumers, as well as nutritional improvement.

While strengthening mainstay products, the Group will continue pursuing deliciousness. The Group will maintain its efforts to provide fine-tuned solutions that address various needs, including health-related needs such as salt and sugar reduction and the need for smart cooking.

Although Japan’s home-use frozen food market started to grow rapidly in the late 1960s, the quality of commercial frozen foods at that time was low and did not earn consumer trust.

Under these circumstances, the Ajinomoto Group entered the business in 1972 by leveraging the technologies it had cultivated in the seasonings business to launch products in the high-price range that based their appeal on high quality and luxury. The Group captured consumer needs and immediately grew into a top brand.

Since then, we have steadily increased sales in tandem with changes in Japan’s social and business environment, including the rise of the nuclear family, popularization of microwave ovens, growth of major retail chains and advances in frozen food distribution networks.

In the 1990s, the Group began production at overseas bases in Thailand and China to take advantage of the cost and product development benefits of using excellent raw materials sourced locally. We established a system for manufacturing products at overseas subsidiaries for export to Japan.

In 2000, the business was spun off as Ajinomoto Frozen Foods Co., Inc. to integrate management of development, production and sales.

Since then, dietary needs relating to safety and reliability have continued to increase and the Group is focusing on strengthening its unified quality assurance system from raw materials to products.

The business began in the 1970s with the export of frozen foods produced in Japan to the United States.

In the 2000s, the Ajinomoto Group began local production in the United States. We also began sales in Europe of exports from Thailand, which had been producing products for Japan.

In 2017, we acquired LABEYRIE TRAITEUR SURGELÉS S.A.S. (currently AJINOMOTO FROZEN FOODS FRANCE S.A.S.) in France, and we are currently stepping up development in Europe.

In Japan, backed by factors such as growing consumer needs for convenience and shorter preparation time due to changing lifestyles as well as a labor shortage in the restaurant and industrial-use sector, the market for frozen foods that can meet or resolve these needs is growing. In addition to expanding core areas such as gyoza, we will work to provide value-added products that address social issues and customer needs.

Outside of Japan, the Asian frozen food market, of which gyoza and cooked rice dishes are representative, continues to expand rapidly due to factors including the growing popularity of Japanese food and the increase in Japanese-style restaurants in the United States and Europe. Under these circumstances, we are working to expand our business by making full use of our local production and sales networks with the aim of becoming the clear No.1 in the Asian food category. 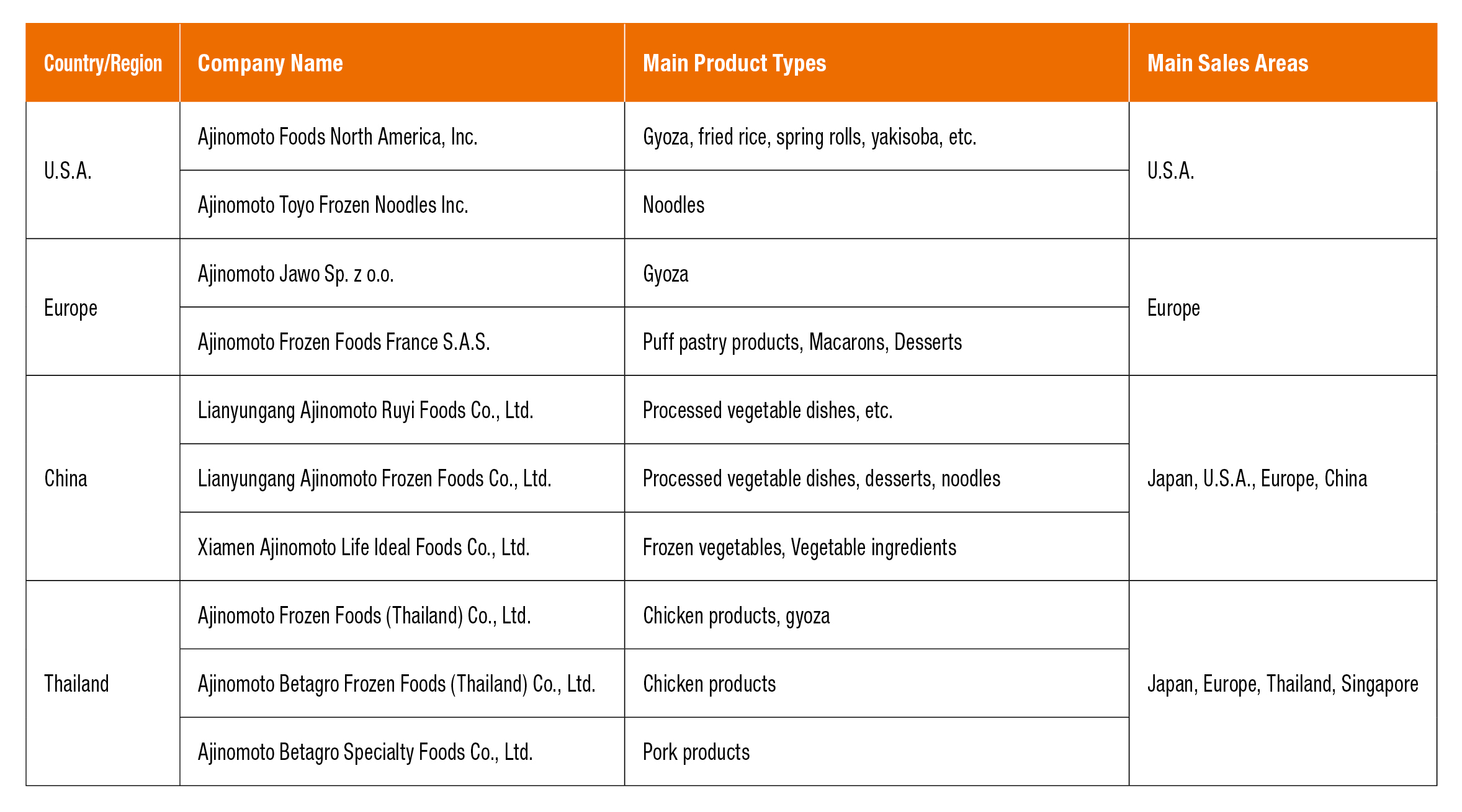