What are Feed-Use Amino Acids?

The barrels at the right are a model for protein values. Each individual stave represents the degree of sufficiency for a particular amino acid. Barrel 1 shows the amino acid pattern of wheat. In Barrel 2, adding supplemental Lysine to the same level as that of threonine (the second limiting amino acid) raises the total protein value to the level where lysine and threonine become co-limiting. Barrel 3 shows Lysine and Threonine added to the level of the third limiting amino acid (tryptophan), demonstrating how amino acid supplementation improves the nutritional value. By adding Lysine and Threonine, the protein value of wheat can be improved by 25-50 percent. 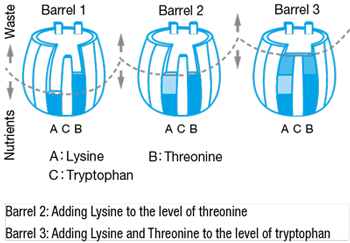 From Feed with Added Amino Acids to Meat Products

To formulate feed, feed-use amino acids are added with vitamins and other substances to soybean meal, corn, wheat and other natural feed ingredients. 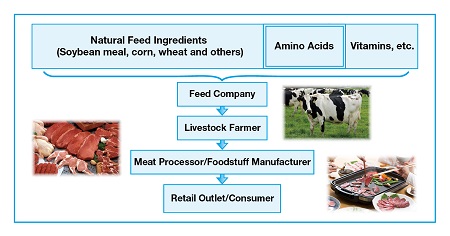 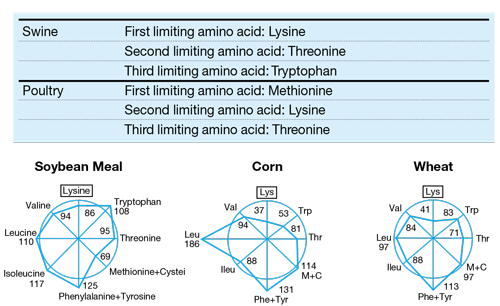 A feed that is mainly composed of corn and soybean meal helps illustrate the correlation between the grain market and the prices of Lysine and Threonine. Soybean meal, used as a protein source, is relatively rich in lysine, while corn, a primary energy source, contains much less.

For example, if the price of soybean meal is high and the price of corn is low, feed manufacturers prefer to use more corn to save on feed costs. In this case, however, feed must be supplemented with Lysine so that animals’ requirements for this amino acid are met. The theoretical maximum price for Lysine can be determined through comparison with the cost of lysine supplied with soybean meal. This maximum price is called the shadow price (or the opportunity price).

■Correlation between Threonine and Lysine

Feed-use amino acids contribute to the conservation of natural protein sources and effective use of farmland. Generally, soybean meal in feed can be partially replaced with corn and Lysine using the following formula:

Feed formulations are normally calculated by computer, using linear programming to determine the lowest cost while meeting nutrient requirements with available feed ingredients. Adding supplemental limiting amino acids such as Lysine based on the barrel theory improves the amino acid balance and efficiency of feeds. This reduces the amount of plant protein sources required.

Without the addition of limiting amino acids, it is difficult to achieve an ideal dietary amino acid balance using only plant protein, which leads to an excess of protein in the feed and the oversupply of unnecessary amino acids. These excess amino acids are not utilized by the animals, and are excreted as nitrogen compounds. The ammonia generated by the excreted nitrogen compounds causes odors. In addition, excess excretion of nitrogen leads to soil contamination and pollution of surface and groundwater. Environmental pollution from this nitrogen is a big concern in livestock production.

On the other hand, the addition of Lysine is effective in reducing the LC (life-cycle)-CO2 (total volume of CO2 produced from manufacture of raw materials to production) of formulated feeds. (As an estimate, each kilogram of added Lysine reduces LC-CO2 produced by 1 ton of feed by 2.4kg.*)

Using limiting amino acids in feed in this way reduces excess intake of other amino acids and proteins. As a result, they contribute to resolving the environmental issue of reducing excretion of nitrogen and LC-CO2 into the environment.

* Estimated LC-CO2 is calculated using average figures from the Group’s current Lysine production, with a soybean meal/corn diet, and it is not necessarily applicable to Lysine in general.